It’s all about baby steps

I still remember these words from

Whether that be personal life, academics, career, health, or basketball

Don’t worry about being a millionaire overnight

Rome wasn’t built in one day

It’s not a lot, but baby steps eventually turn into strides, and before you even realize it, you will be running fast towards your goals

Then there would just be an overseeing universal power, called “Karma” that would hold every individual accountable for their actions

To think before we act

To stand up for what we believe in, to feel remorse, and to be better versions of ourselves.

Good thing we don’t need “karma” to hold ourselves accountable

Children lived in mansions which houses up to 14 kids

And there was just so much free land and greenery

But the students at MHS all come from underprivileged communities

Which is good and bad

My friend who goes to Villanova has friends at Princeton, UPenn, Georgetown and other esteemed universities

But out of his 200 graduating class, he notes several who have dropped out of college after one or few semesters and maybe 15 have ended up starting families already before they’ve turned 20, which also forces them to leave school

How can we truly help people besides simply financially and educationally? I think personal life and EQ skills are just as important to teach besides a good education and scholarships for school

Not everyone is fit for school

But everyone is fit for life. And I think life skills is something we need to better teach future generations

When granted the opportunity, it’s much better for your own self-esteem and personal success if you choose to be a big fish in a small pond, rather than a small fish in a big pond.

Here’s the issue with being a small fish in a big pond. Sure, you’re in the big pond now, but you’ll get eaten.

It’s as simple as that.

If you are, instead, the big fish, you have the perfect little pond for you to grow, nurture your abilities. You have the flexibility to fail. This is your opportunity to make big mistakes, make big strides, and try to dominate your little pond.

Then you’ll be prepared for the ocean of life. And life is the biggest pond in the world.

If you choose to be an average Harvard student, you best have a lot of grit, discipline, and determination. Because you will be attacked. You will feel lesser. And it’ll be tough. The chances of survival are less, but if you do survive, you’ll have gone through the tough aspects of a big pond already.

Take a look at this chart. The bottom third SAT scores at Harvard STILL beat the TOP third at an average school. But the graduation rate is still symmetrical to that of the average school. If you are average or below average in a big pond, be prepared to be eaten. 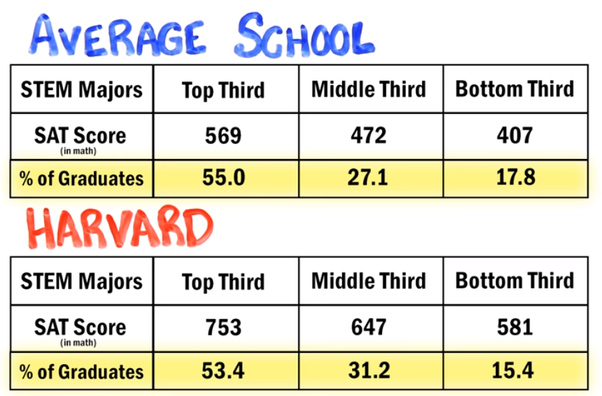 I’d choose to be a stellar student at a lesser-known university. This is because I don’t think I’d have the emotional capacity to handle being “average” at Harvard. Everyone is “average” when compared to the entire world; I’d like to feel a little special at least for a few more years before I enter the big ocean of life.

YouTue Video: Does your school matter?

Don’t relegate creativity to things you believe are traditionally creative

And don’t relegate life to externalities

One of the biggest self-battles I’ve been having with myself since the start of the new year is the concept of leisure.

How do I have good leisure?

Today I did nothing productive. I slept a lot. I ate some good food. I “relaxed” and played video games.

But my soul was never at peace. And that is what I’ve been learned to accept as leisure: an at-peace of the soul.

Regardless of what the activity I am doing, if I am not at-peace internally, then it cannot and will not be considered “leisure”

Leisure can happen while skydiving or while traveling the world, or it can happen in your dorm room.

But for me, I did not have leisure today.

Instead, I was fighting myself. I was resisting.

I don’t know how I’ll fix this aspect of my life.

I imagine if I don’t figure out a solution soon, then I’ll eventually burn out.

Despite what Elon Musk or Gary Vee might tell you, man was not meant to only work. We must find a way to recharge–even if it’s through other forms of work.

Often when I’m day trading stocks and I profit for the day, I want to keep going. I want to use the positive momentum. But what I’ve learned is that often in those instances I start trading with emotion and I end up losing partially the gains I made earlier in the day.

Even with day-trading stocks, it’s important to understand that life isn’t a sprint… it’s a marathon. And you want to be consistent and show up every morning. Take it one step at a time; live to trade another day.

I was inspired by my high school teacher to share the books I’ve been reading and plan to read for 2019 here on my blog. Last year I finished 50 books, and although I did discuss a few of them, I think it would be good for me to reflect on each book I finish.

Meditation is weird because people often think that it is difficult (as I did too), which is a paradox. Meditation is perhaps the only time during the day that I actively try to DO NOTHING and allow my mind to be free.

This book, written by the Founder of Headspace, was a great introduction to the world of meditation and mindfulness and is also one of Bill Gates’ top 5 books of 2018.

As I’ve been using the Headspace app for the past 3 months (almost daily), I did already know many of the teachings that were written in this book. So, for those that don’t currently meditate, and would like to dive into the world of mindfulness and Headspace, I would totally recommend you pick up this book to learn more and hopefully drive you to continue on this path.

I would have to say that meditation and mindfulness practice has been the best habit I’ve picked up recently, and I will no doubt continue to consider this one of the best habits of my lifestyle that I hope may continue for many years. It’s amazing how 10-minutes a day can change your life.

Get it here on Amazon: https://amzn.to/2MbiCLl

Today is a journal entry about my day in NYC.

So my friend and I woke up at 8 AM to go play a basketball tournament about an hour away from the city.

The first game I played terribly–it’d been over 3 years since I’d played organized team basketball like this, and it took me a long time to adjust. I only scored one three-pointer and my friend had to carry the majority of the weight of the team. We ended up losing badly by 39 points.

The second game, after we went and ate lunch and regained some energy, our team did much better. Granted, our opposing team wasn’t as good as our first team, but I was also much more comfortable with the basketball. I scored maybe 6-7 three pointers, and also hit the game winning floater to put us up 61-59 in overtime. It always feels great to be in the zone. I had a lot of fun either way, because basketball has always been one of my passions. Maybe I’ll continue playing more league games like this; it’s an entirely different vibe and atmospheric competition than playing casually with friends at school.

We ate dinner in the city and then walked around exploring Times Square, Rockefeller Center, and finally ended up in Bryant Park.

There is always this ethereal vibe when walking around the city at night. When you notice how beautiful certain buildings are, and how the lights reflect in different ways, and how all of these people, couples, groups of friends, are all just existing together. It’s therapeutic to me. I’d imagine if I lived in the city, a casual pastime for me would just be walking around the city while listening to some of my favorite songs.

Bryant Park was extremely cute. There was a skating rink in the center, which I really want to go on one day with a group of friends (but more planned). There were also a bunch of vendors selling unique accessories, jewelries, clothing items, and other miscellaneous items.

The more time I spend in New York the more I fall in love with the city. How I Met Your Mother has been my favorite TV show since I was 12 and watching that show made me truly fall in love with the concept of Manhattan. Getting to actually spend time here occasionally on the weekends has made me realize that love.

Although a part of me is still sad that I was rejected by NYU, I’m also a little satisfied that I am not spending my college years in NYC. I have the rest of my life to live anywhere I want, while my 4-years at Villanova will be amazing. I know it because I’ll make sure it is–and so far it has been.

I’ve been trying to practice mindfulness in life through meditation and through my writings. I’ve also been trying to be more in tune with my expectations and I think it’s starting to help. The first basketball game today, I was expecting myself to perform really well, despite the fact that it was early in the morning, I was tired and hungry, and I hadn’t played organized basketball in quite some time. The pressure I put on myself got to my head, and of course, I performed terribly. While the second game, I went in with zero expectations. It was low-pressure, and just pure fun. And the more fun I had, the better I performed, and in the end, it surpassed any expectations I could had previously set on myself.

I don’t know that I would be having as good of a college life if I went to NYU.  Maybe I expected too much from living in the city, and maybe I just fantasized too much about being an NYU student.

I’m happy where I am right now. But I won’t forsake how much more happier I can become. But I also won’t go into life with these expectations, because I’ve learned that in the end, these expectations will only drag me down.